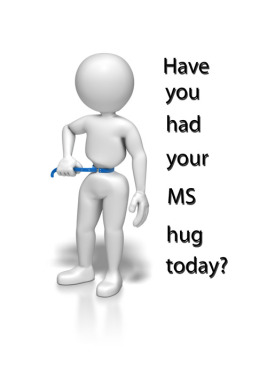 Yesterday afternoon the worst MS hugs that I have ever had started, I felt this incredibly sharp cramp in the left side of my upper spine and that was the beginning. Hugs are basically a spasm that effects the fine muscles between your ribs, for me and many others it usually starts just as yesterdays did and they spread form there, I usually get them right round me but occasionally they are one sided and as always it is my left side. From it’s start point it spread up and down my spine for about 3 inches and them right round to my side stopping just to my front, not making it all the way round but for some reason far more intense than I have had it before. By the time Adam came home I was getting bad tempered with it, spending several hours with a pain I would have ranked from between 8 to 9, unfortunately does get to you and I get snappy with it. Add into that the fact that at almost the same time as that started, I also started to get really bad low abdominal cramps, bad ones. So the second half of yesterday wasn’t the best to say the least. I just so grateful that the hug didn’t continue to make it’s way round the whole of my upper body.

All afternoon I had tried to relieve it and find some relief but without much luck, it wasn’t until the evening when I gave up as I couldn’t take anymore of it, with my concentration broken totally by the pain, I couldn’t manage to do anything of use or fun on here, so I gave up and went and sat on the settee feeling rather sorry for my self. I tried several times the process that usually helps to break it were I compress the area as much as I could throughout the afternoon, but I tried again by pushing myself into the arm and back of the chair and it started to release, bringing the pain levels down but not gone. I guess that because I was applying pressure over nearly all of it, at the same time rather than just what I could cover with one hand it made a difference. I am no doctor but there must be some sort of medication that would make a difference to that type of pain. Nothing I have ever tried has made a difference and I am on the highest dose that they will give me of the anti spasmodic drugs. When pain is this bad and growing all the time, it makes me really wonder about the future. For now I can deal with it as I know it always goes away, but I have noticed that it last longer and is more intense than it was 3 or 4 years ago, so where will it be in 3 or 4 years from now?

Today I still feel ill and I have the constant pressure feeling under the right side of my ribs and across the front in a narrow band which I think is all from my gallstones, but there is a mild hug still grumbling where it was yesterday, how the rest of today will unfold I don’t know, but I don’t want another afternoon like yesterday. Pain is the hardest thing in the world to live with, I would rather be throwing up than sitting in so much pain that I don’t know what to do with myself. When the pain started yesterday in two areas at nearly the same time, I started searching the web and found one site that said a hug could actually go from your upper chest to the base of your spine, which made me start to think about the pain I have had recently in my pelvic, could it also be an MS hug? That is a question I will be asking the MS nurse when she arrives on Thursday, the internet says yes but the internet says a lot of things and I just want to check before I just bundle it in. But it is still one of those questions that I don’t know if I really want the answer to, as if it is my MS there will be nothing that can be done about it, I always dread the it’s your MS answer, I remember being happy the very first time I was told it was MS but that is long worn off and I hate hearing it now. How much pain is one person meant to be able to put up with, without an real answer and a real solution?

2 thoughts on “The hugs are back!”