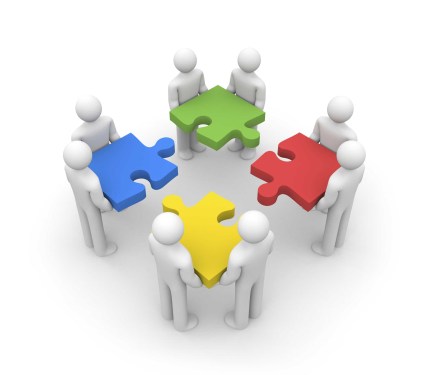 Sometimes when it comes to research I fear that the picture above is the real problem in finding a cure for anything, lots of different people holding lots of different parts and not bringing it all into one place. I do know that there are many many researchers who do share info and that a lot of the charities act as information hubs, but I worry that there is a hidden gem, that tiny piece that could be the key that unlocks and brings everything together hidden in plan view. I am a long way from being the only person who blogs about their illnesses and I again am not the only one who documents the changes as they happen, who is the person or organisation that are pulling all the blogs together.

You and I know that when you visit a Doctor to discus you illness that you never really explain in detail what is happening and has happened in the past, so even your specialist is going to here hundreds of voices saying what at root may be the same problem, but it doesn’t sound like it. To expect a Doctor to pick up something that has so far been overlooked, is actually an unfair responsibility on them, anyone will not if all the different voices are saying the same but when said in different ways or omitted, they don’t really stand a chance. If I asked 50 off you to describe the last headache you had I bet you that no more than two or three would match, from the rest there would only be a handful that describe it in enough detail to form not just an understanding but enough detail for the reader to put themselves in that position.

Blogging is still a new phenomenon and I expect very much over looked when it comes to a pool of information. My own experience a few months ago left me far from sure the work was by any means on track. So many discoveries have been made in science by what you could call accidents or chance by people who have thanks to reading or hearing something, they have a light-bulb moment and the discovery happens. I hate to think that within all those blogs are the eureka moments that could catapult research forward enough to lead to a cure or a prevention method. On the surface the simple solution sound as though a bot could be the answer, but as an analyst the problem with that type of data pull is, you get back what you asked for, not the unknown.

The figures of research have passed my by now twice once because I was asked with in month of becoming housebound to join a heath survey and check for the over 50’s, you had to attend at one of the hospitals and all your medical problems were to be documented each year for 10yrs, then the experience above that I mentioned, their questions were so far off the reality of MS that although I made suggestions the whole thing remained unchanged. Part of the problem there I think was that they university running the program had read a book on MS and based their questions on that, rather than talking to the people who actually lived with the illness. Breakthroughs happen daily in medicine, illness now that they cure a 100yrs ago killed but I just truly feel that an important resource is being missed, that resource is us, every single human on the planet who has ever been or are ill.