I’m not clear but I am sure that this flare has reached it limits. Yesterday evening I found that I could at last relax into a spasms rather than be gripped in agony. I know that sounds a little odd to anyone who hasn’t been through pain of this nature but I can probably at best equate it to labor pains and being taught to go with the pain, breathing and letting it happen rather than tensing and fighting it. When the spasms are bad you can’t do that, the pain and tightness of the cramp just throws the surrounding area into tensed knots that set solid, forming a wall round the spasm core. You can’t break that, it is a fortification that will stand against everything I can throw back at it.

With this improvement I started this morning to reply to the comments and emails I have had, then realised that the best way to do that is right here.

To those who don’t have MS it is hard to understand that there is no medication that really helps when things are really bad. My MS is one of the nastier ones that never leaves me at peace, I am on a path that is always downwards and always debilitating. On the surface to an outsider a spasm is a muscular process, but it isn’t, all the effects of MS are from the nervous system. For example if you had muscle fatigue and lose of strength you would expect the answer would be to exercise and build the muscles up slowly so that they don’t become fatigued, that would work unless you have MS. The fatigue is coming from the nervous not the muscle, exercising only causes more pain and will never stop the fatigue, so a viscous circle emerges as in time the lack of use wastes the muscle and normal fatigue also starts to occur. The weaker the muscle become the more they spasm, there is no winning formula.

So far medications that are available have little useful effect as they can’t be targeted enough, to be effective. I would be dangerous to constantly use muscle relaxants at the level needed to stop spams, that level would leave you zonked out with loss of accentual muscle controls. You can’t medicate the nervous system either at the level required without either breathing or heart problems, so little is left other than normal pain control drugs which are simply not strong enough. The only thing that can be done is low levels of drugs that are designed to hold things at a balance point and sort of do this, well at least allow daily living.

The scariest symptom and rare in most forms other than ‘Relapse Progressive’ or ‘Primary Progressive’ has to be the ones that cause breathing problems. I would class myself as lucky, apart from the spell that I spent in hospital, to date, they have been minor, just silly little blips. Clearly though anything in my body that has a nervous system link within it, that means my whole body, can be a MS target.

There are areas that are common to all MS patient, all will have some degree of problems with, arms, legs, pins and needles and numbness, the next layer seems to be eyesight, memory, speech, eating. The layer above this is when all these symptoms and some others, become severe and debilitating, some will die directly from MS, most die from associated conditions like pneumonia.

Today my left leg is still more painful than normal and there are spasms in my lower and upper spine. The fog has cleared enough to be just a mist and my tremors are intermittent rather than constant. The hug is back with a extra pressure in my diaphragm, all of this is above normal levels but unlike the past few days I feel that I once again want to be part of the world rather than looking for a route to hide from it. 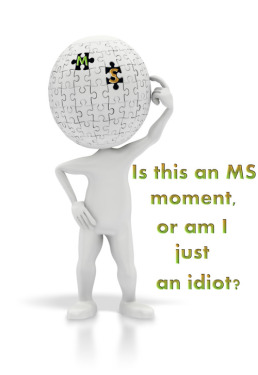